I began writing this post before I noticed that it was 20 years since the Port Arthur massacre and then we had a few weeks of follow-up stories and remembering that terrible day; so I held off finishing this gun control article.

The news about guns still remains scary, so I’ll continue where I left off. 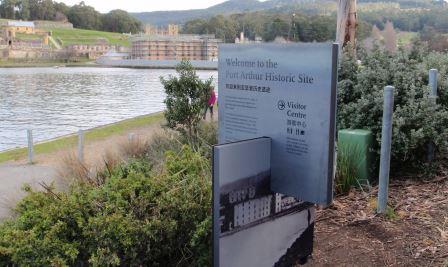 It is often heard around the world – and President Obama has mentioned this several times – that Australia has achieved the impossible (as far as America is concerned). We have legally controlled use and ownership of guns.

And of course this means (ideally) that we have fewer random shootings, homicides and massacres. Yes, we don’t have mass gun deaths along the lines of those suffered by the USA and frustrating the hell out of Mr Obama.

Every day now though it is reported in the news, online or TV and in print media; another Australian gun death.

In this last week, a gunman shot and killed a ‘well known underworld figure’ and an innocent mother – drinking coffee nearby – was injured in a shopping centre in Bankstown, outside Sydney.

Remember the days, fellow Australians, when this was unheard of? I definitely remember one day suddenly (about the 80s) noticing that police were carrying guns and going “WOAH, when did that happen?”

And (after living in WA for the last 30 years) only noticing in the last five to 10 years that there was a more than occasional gun crime news report.

What I would like to know is – where are the guns coming from, if we have successful gun control laws in Australia?

After the Port Arthur massacre where 35 people were killed and 23 wounded – John Howard stood up and made it clear that this was intolerable and Australia backed him. National laws were created that banned certain automatic and semi-automatic weapons and required license applicants to have genuine reasons for owning guns. And he raised a tax to pay for a ‘buyback’ initiative to get as many guns off the streets and out of households as possible.

Gun crime and deaths did decrease after this initiative – and there is debate about whether this was going to happen anyway (as there was somewhat of a worldwide trend) or if it was a direct result of the new gun laws.

In any case, we don’t experience gun-related massacres on the scale that the US does, which is a blessing and kudos to John Howard and his government of the day.

Here is a demonstrative graph, borrowed from a Business Insider article online (http://www.businessinsider.com.au/australia-gun-control-shootings-2015-10) 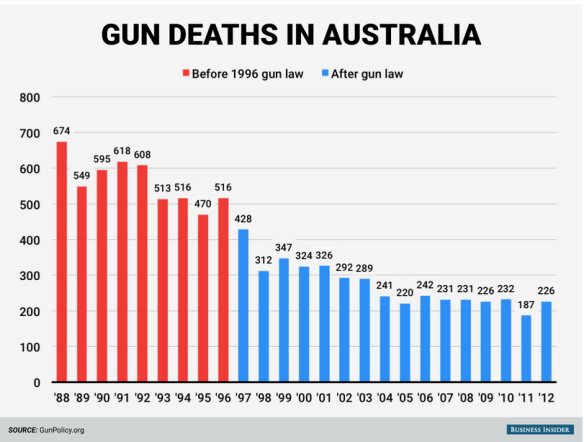 In red, before 1996 gun law enacted – 20 years ago this month that Port Arthur massacre occurred – and in blue after gun law introduced. Can’t be all coincidence, surely?

You can clearly see that there are still gun deaths, but apparently ‘mass’ shootings or ‘massacres’ technically mean four or more deaths in one event.

How then do we explain the regular occurrences of gun crimes reported in Australia every day? It worries me.

My husband and I have spent all of our married life in country Western Australia. I could see from news stories that gun crime occurred and was saddened that this seemed more of a regular occurrence than I remember it had ever been.

I felt safe in country WA though – from being randomly killed!

Now we are living on the NSW/Victoria border and the number of gun crimes I hear reported every day is scary! It does feel that I’m in more danger of accidentally being killed because of where I live. Just by moving interstate, I’m living dangerously.

I have even found myself in a coffee shop and looking around for the exits and wondering where I could hide, if a gunman walked in and resigning myself to the fact that under the table doesn’t work!

The link below is to an online article written in March 2016. It discusses the apparent rising trend in Australian gun crime

Violent crime; yes. We are human and humans are violent and that is damning enough. Why do guns come into it? They should only come into the picture for the following citizens:

Who else NEEDS a gun?

In Australia, it would be pretty useful to have a gun for self-defense or to keep marauders away, but only in the event of a Zombie Apocalypse.

However, in America everyone NEEDS a gun and more to the point have THE RIGHT to own a gun. Due to some wording in their REALLY OLD constitution, that talks about the ‘right to bear arms’, which was highly relevant in a time when there were no regulated protection forces and citizens were often expected to form militia units to protect themselves, or fight for their government.

If you own a gun there is a higher chance that you are going to be involved in a gun related incident.

And it does seem to be that more people are killed by police officers, because the gun is available. If in doubt, shoot the perp; would be a natural instinct (whatever their guidelines might advise) particularly in countries like America were gun ownership is high and therefore the chances of coming upon an armed criminal are higher.

Just having the gun is upping the odds of a gun related incident. In the day-to-day duties of a policeman and ‘walking the beat’ wearing a gun is asking for trouble.Sorry police-people. I have great respect for you and don’t have to do your job!

Special police squads that typically carry; yes, I agree with that. Called on in particular circumstances. Or every officer having gun availability at the station, under lock and key. Okay, yes. If a major event occurs – such as said Zombie Apocalypse – then easier access to weaponry can be justified. Especially in Australia, where there must be a much lower expectation that you are going to come upon a gun-wielding criminal.

In Australia, at the moment, most gun deaths are suicides (see article link above) but the occurrence of gun-related crime is definitely increasing; as I said, I see it in the news everyday.

WE ARE STILL NOT COMPARABLE to gun deaths in America yet. We don’t want to get there. It is not something to aspire to.

However, on a rather cynical note, our government has plenty enough to worry about. Like not changing over Prime Minister again, in a hurry! 😛

AND on a lighter note, Port Arthur Historical Siteis an amazing and spooky place to visit, if you’re in Tasmania.

3 thoughts on “Australia has gun control? Tell me another one!”