Is there such a thing? I’m thinking urban, city-street walking. At the moment specifically tourist cities, where there is a co-mingling of cultural differences and counter-movement of expectation when encountering fellow walkers of the street.

What the hell are you talking about Trish, you may well be thinking 🙂 ?

At home that is what I assume. And I get cranky when I’m walking along, perhaps in my own thoughts, and I have to pull out of them because some moron is coming toward me on the left. And we have to play, who gives way to whom. I shouldn’t even have to worry about it. My radar is on, of course, to deal with obstacles. People coming out of the shops, for example. They can’t see ahead and it is therefore acceptable that I’m also keeping an eye out. Although, I have to say, that the number of people who practically fall out of shops without any seeming sense of self-preservation is amazing!

So, I’m in Galway (still) and as I say, a multicultural collection of trans-Pacific, trans-Atlantic, trans-Irish Sea via English Channel – with a range of different psyches. Especially when it comes to what is acceptable regarding manners, politeness, and sense of social etiquette in relation to where you now find yourself.

Add in very narrow, one-at-a-time pathways. Add in the couples who just cannot let go of each other long enough to navigate with respect and thoughtfulness the changed situation. Add in a general lack of foresight. Add in general bullheadishness – I will not give way, I will not give in, I was here first, I’m in a hurry, I’m oblivious and walking slowly; or walking fast – and it seems chaotic.

I did overhear someone in a group ask the question of their guide. What’s the rule for walking? Which side of the pavement? The guide laughed and said there wasn’t really any rule.

But let’s take Shop Street, Galway City, middle of summer tourist season, way too many people in the street. We’ll orient ourselves down from Eyre Square, which is the default landmark reference in town. We walk down Williamgate Street, on to William Street, which leads on to Shop Street, then on to High Street, further on to Quay Street which then ends at Spanish Parade.

The crowds move all which way and whatever! I walk into this mass of bodies and if there was a clear understanding of walking-the-street etiquette, it could be an easy and relaxed stroll.

The streets are cobbled – obstacle one. The streets meander – obstacle two. People pop unexpectedly out of shops, restaurants and pubs – obstacle three. People walking in groups, want to stay together. Middle-aged, elderly or poorly couples want to hold on to each other for safety. Suddenly, it is raining and there are now puddles, actually (most likely) the street is now flooded. Galway is a Medieval city. Bad tempers rule, thoughtfulness recedes. Obstacles four, five, six, seven and eight.

And I personally have seriously reduced vision in the right eye, so I’m almost oblivious to everything and everybody on that side. It also means my depth perception is ineffective and therefore I have eyes on the ground, in general. I wear glasses and (as all glasses wearing people appreciate) we could use wipers when it is raining, and so my head is down even more to protect my face. Therefore, I’m not as effective at watching where everybody else is in relation to myself. Obstacle nine!

Obstacle 10 is a lack of general consensus.

Seriously, if there was consensus that ‘when in Ireland’ we all walk to the left-hand side, because that’s the side of the road we drive on, then the risk of inconveniencing others, of causing a collision or an injury, would be mitigated. And of course, we’d then carry that awareness into other countries, based on their road rules.

Movement in the street would be easier and everyone could relax more with a consistent message.

See, I tell myself; it is a logical conclusion to have a walking etiquette built around accepted local road conventions. Now can I convince everybody around me?

Yes, I know. I think too much. Enjoy the holiday Trish 😀 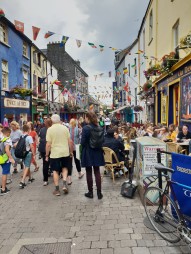 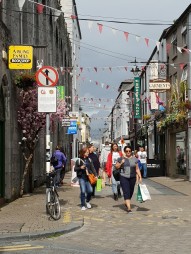