As a family, we’ve come to the agreement that our old cat, Jesse, is about 17 or 18 years old. Our youngest child (22) would have been about 5 years old when Jesse and his brother James joined us.

Jesse with his ‘bros’ in his middle age

James was lost during a thunderstorm, quite early on. Both cats ran away, but we found Jesse in the end. He’s always been a wild and tough old tabby. Even though domesticated and sterilized, for his first 10 years he had a large territory – a neighbour theorised it was as much as 5km and couldn’t believe we’d had him fixed.

It wasn’t until we moved to Esperance though in December 2007 that I began to connect to Jesse. Previously, he was ‘something I put up with’ and this was because he was always away from home, at one of the neighbours and I felt he only came home to see if it was dinner time.

When you move to a new place, it is recommended that you keep your cat inside for some weeks – 2 to 4 weeks, perhaps. I decided that to be sure, we’d keep him in for 3 weeks. And surprise, surprise! By the end of this, that darned cat was sleeping at the end of our bed.

At first, of course, he’d settle where he wanted to and was very stubborn when asked to ‘move along please’. However, with some perseverance on my behalf and gentle nudges, he learned that he was allowed only at the end of the bed, on one of the corners and on the towel provided.

And then he was moved along to NSW, across the Nullabor from Western Australia, in Eric’s car with our other, younger cat. He handled that very well. And he settled into his new home in NSW, becoming even more domesticated. He didn’t create a large territory for himself, just visiting across the road occasionally. And luckily we live in a cul-de-sac, so he wasn’t in too much traffic danger.

Eric (my husband) comes from a farming / country background and therefore ever since we’ve had cats – if they were sick or injured – he’d make comments like ‘I can always take him down the back of the garden!’ 🙂

Of course, he never did. I didn’t want to visualise my lovely and gentle husband ‘knocking off the cat, with his bare hands’.  And Jesse and Eric grew even closer, with Eric’s lap being the preferred place to hang. And, just recently (for some unknown reason) Eric began to address Jesse as ‘me old cock!’. 😀

We grew sentimental in our old age!!

So, this brings me to the sad ending that Jesse died last night. He had been physically deteriorating for a couple of years. He was skinnier, too many bones showing through. He was hungry and thirsty all the time. And when he wasn’t hungry, he was asleep. Even more than cats usually sleep – which is like 16 out of 24 hours every day! He wasn’t complaining though, didn’t seem to be in pain – apart from arthritis. And we decided that everyone gets old and unless he was obviously suffering, then we wouldn’t be seeking out drugs or other treatment.

It happened so fast. About 8.30pm he gave a cry when he was gently moved off a lap. About 11.45pm he dragged himself out of his cat bed and staggered across the floor, falling and clearly not able to keep upright. He defecated. We put him into his cat bed, with water nearby and extra towels and went to bed. He wasn’t complaining.

A couple of hours later, I heard the tinkle of his collar bells indicating he’d moved and listened for his footsteps down the hall. But they didn’t come. After a while I went to check and he was sprawled on the floor just outside of his bed and miaowed to me as I approached.

Eric tried hard to sleep – he had an early meeting. But I lay ‘drowsing’ with one hand in his basket, which he kept nudging. Then when he was out on the doona, I kept talking to him and patting him. He kept trying to purr between his gasps for breath. By this time, he did have some pain. He’d occasionally throw a 180° as he tried to get away from something. But otherwise, he breathed heavily and miaowed occasionally.

Eventually, I woke up with a hand on him and could feel he was no longer breathing.

I didn’t think I’d be sentimental about this, but it was clear that he wanted to be near us and we obviously cared about him. He has gone from us now, but will be remembered with love by his family. 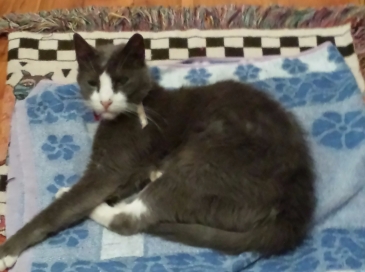